The Stokes Family History in Petrolia 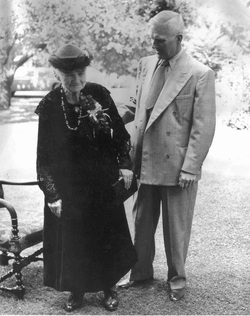 In 1900, Margaret Polson Murray, a Montreal native, founded a women’s charitable organization known as the Imperial Order Daughters of the Empire.  The first chapter was formed in Fredericton, New Brunswick. IODE, as the organization is now known, is an exclusively Canadian women’s volunteer organization.

Over the years the IODE has changed to meet the needs of all Canadians from coast to coast– with a particular focus on children and their needs.  As a symbol of patriotism and loyalty to the Queen, members wear the IODE badge  on the left side.

The Margaret Stokes Chapter formed on March 30, 1949, in Petrolia, Ontario.  The thirteen founding members named the chapter after a tireless community worker, Margaret Stokes, who was celebrating her 100th birthday and whose family was associated with the development of the Petrolia District

In 1866, Samuel Cole Stokes (b. 1849 in Sarnia) settled in Petrolia to work as a building contractor. Known locally as the "Boy Boss" he was involved in the construction of underground oil storage tanks and the original St. Clair River tunnel. Both he and his wife Margaret (nee Grieve), formerly of Richmond Hill, were actively involved in the community, politics and their church throughout their lives. The Stokes had 3 children John, Jessie and Samuel Gladstone. Jessie, who married a Mr. Arthur Drummond, was also very active in the local community.

Margaret's son Samuel, commonly known as ‘Colonel Sam’ or ’The Colonel’, served in the army during both World Wars and was awarded the Military Cross by King George V in 1919. He married Louise Pollard of Petrolia and together they continued the family tradition of community involvement. Louise Stokes is remembered as a vibrant and charming woman who made financial donations to assist the chapter and gave floral bouquets for social events. The Colonel and Mrs. Stokes had two children: Edward (Sam)uel (killed in action, Royal Canadian Dragoons,1944) and Nancy Louise.

Nancy married Frederick Edmonds Punnett of Lindsay and lived in Sarnia, Midland, Michigan and Camlachie. She was a member and past president of the Honourable Norman Rodgers and the Errol Egremont Chapters of the IODE until her death in the Spring of 2007. Nancy was a founder of The Gallery in the Grove in Bright's Grove. Mr. and Mrs. Punnett had three children: Paul, lives in Michigan with his wife and son. Sam, lives in Toronto with his daughter. Lynn Punnett lives in Vancouver and has two daughters and a son.

In 1974 Lt-Colonel Samuel Gladstone Stokes established the IODE Stokes award to honor the charitable work of both his mother Margaret and his wife Louise.  The Stokes award is presented annually in June to one student graduating from each of the three elementary schools in Petrolia.  These students are chosen by the teachers as the ‘best all around students’ based on academic achievement, involvement in school activities, leadership, class spirit and co-operation with others.

Our Early Days as reported by the Petrolia Topic...

IODE REMEMBERS HISTORIC ROOTS  (Topic Feb 10, 1988)
The week of February 13 to 20 commemorates a Canadian women’s organization first founded to promote patriotism and raise funds during the anxious years of the South African War.  Incorporated in 1901, members of the Imperial Order Daughters of the Empire would continue their fund-raising efforts through two world wars, collecting, in all, over $12 million.

In 1900, Montreal newspaper correspondent and editor Mrs. Clark Murray traveled across the provinces rallying support for her idea of a patriotic women’s organization.  Today IODE has more than 500 chapters across Canada.

In addition to efforts on behalf of the Boer War, those early years saw important activities towards the prevention and cure of tuberculosis with Preventoriums being built and furnished in several provinces.  Under the motto, “united for service”,  the Order aided with funds for war offices, homes for nurses, clubs for servicemen, food parcels, civilian and refugee relief and food packages for prisoners of war.  Later, war memorial funds were set up for university and postgraduate scholarships.  The value this year of those IODE scholarships is $12,000 for study abroad and $8,500 for study in Canada.  There were nine postgraduate recipients for the 1987-89 academic years.

Citizenship has always been an important IODE department and welcoming aid has been offered new immigrants since the 1920’s when members were on hand to greet settlers. Schools for foreign-born pupils were set up and, later, war brides were offered friendship and assistance.  Today the Order works closely with the Citizenship Court providing, where necessary, items such as food, clothing and even lessons in French and English.

The Petrolia chapter is fortunate to have Mrs. Stokes’ granddaughter attend the annual awards dinner.  Nan Punnett, a member of the Errol Egremont Chapter of Camlachie and the Hon. Norman Rogers Chapter of Sarnia are present each June to present the Stokes Awards to Petrolia’s outstanding elementary students.

In recent years, the IODE has been helping a remote and isolated part of Canada; Labrador. IODE Snack Packs provide a nutritious mid-morning snack for a thousand schoolchildren.  Musical instruments, sports equipment and books are also sent to the schools.  Work continues in Northern communities such as Frobisher Bay and Baker Lake where, in co-operation with the Inuit, community halls have been constructed and scholarships, educational and nursing supplies provided.  Other programs underway are toys for the North, the collection of used glasses and hearing aids, boots for schoolchildren in Labrador, knitting or clothing sales and, the upkeep of the IODE’s portion of the Peace Garden situated between the Canadian and U.S. border.

Locally, the Margaret Stokes Chapter continues to sponsor furniture for CEE Hospital and last year a total of $2,361 was spent on provincial and local community services.  In 1986, the Petrolia Library received a municipal grant of $1,400 towards the restoration and furnishing of a newspaper reading room in the building’s east turret.  Local members raised over $1,600 last year on their annual penny sale.

The above list of achievements does not do total justice to all that the IODE has accomplished over the past 87 years.  It must act only as an example.  New members are always an important part of any volunteer organization and locally we continue to encourage prospective members to join one of the meetings on a trial basis.